“My baby has been sitting sideways and my due date is in two weeks. I will have to have a c-section unless the baby changes its position by tomorrow when I have an ultrasound. I want to deliver naturally. Can you help me?” asked Melanie.

“I’ve been successful in the past, but I never know honestly.” I replied. I did not want to create unreasonable expectations.

Melanie was a friend of one of the staff at the office I’m at. She came upon recommendation seeking osteopathic treatment to see if I could help reposition her baby correctly so she could move forward with trying to have a natural birth. I knew I was most likely only going to get one chance. 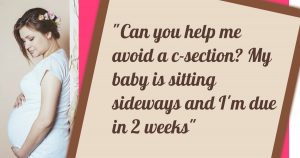 So I evaluated Melanie while she laid on her side. I noticed her pelvis was feeling stiff and rigid, her tailbone was stuck, and her rib cage rigid. The baby was horizontal. I could feel her head on the left side of Melanie’s abdomen and baby’s behind was on the right side. Luckily it felt like the baby was facing Melanie’s back, which is correct. I helped Melanie feel how her baby was positioned.

Before trying to reposition the baby, I first felt I needed to try to create more space so that we could then attempt to guide the baby into position. So I went to work, gently restoring motion at Melanie’s pelvis and sacrum. The pelvis felt compressed initially. Once I was done there, it not only felt decompressed, but then it felt like it could move freely in different directions.

Melanie’s diaphragm (the breathing muscle under the rib cage) was feeling somewhat spasmed. This was pulling her lower rib cage in so that there was not as much space under her rib cage. That leaves less space for her organs to expand as her uterus grows and ends up putting more pressure on her uterus.

Now that we had created more space, it was time to see if we could guide the baby into position. It’s not about forcing it. With a very gentle touch on the head and bottom, I could feel the baby’s head was stuck for some reason. So I gently moved her body and lifted it up towards Melanie’s rib cage until I felt her head free up.

Then I was able to float the head down the and bottom up slowly. With the space we had created, it was easy to float the baby’s head into the pelvis where it should be. At that point, it felt like a puzzle piece being fitted together correctly. Once it was in position, I tried moving the baby to see if I felt it might revert back to another position, but it felt like the baby was strongly in position.

We were finished. I pointed out to Melanie how her baby was now repositioned. She was able to feel the baby’s head in her pelvis.

“She seems in place now. We’ll see what happens tomorrow at the ultrasound.” I said.

I never saw Melanie again. A few weeks later, I heard from her friend that we had been successful. The ultrasound showed the baby was in place and had not changed. She was able to have a natural birth and gave birth to a healthy baby girl. I am often grateful on a daily basis to be able to have experiences like this through osteopathy. Along with being helpful during pregnancy, osteopathy is a great noninvasive option to flip a baby that is breech or positioned in a way that is not compatible to a natural birth.