Free Yourself To Be Yourself: Don’t Let Bladder Leakage Hold You Back

As much as we know about the human body, there are still plenty of mysteries with how it works. Consider Aubrey’s story. She was an osteopathic medical student who came and spent four weeks with me a few years ago. As we got to talking, I learned that she had had right upper back pain for years. During her training, she had sought relief from other osteopaths and chiropractors.

Mostly, they had tried to “pop” her back. It never worked. Up to this point, no one had had success with providing relief there. I was not certain if I would be able to solve her upper back pain. There was only one thing I was certain about at that point and that was that “popping” her back would not work.

In my experience, I was already skeptical of “popping” joints and never found that it provided the results I was looking for. I did not know the answer, but I was confident I could figure it out. I was only going to get a limited number of attempts. I evaluated Aubrey. The ribs in her upper back were rigid, did not move very well, and were tender when I would try to move them. I had some ideas up my sleeve.

I knew from experience that the liver could have been the culprit. The liver lies mostly on the right side and is situated right under the diaphragm under the rib cage. The liver is a heavy solid organ. A twist in the liver could pull on the connective tissue and anchor the upper ribs down rendering them rigid and sensitive. I also worked on some other areas throughout her body that felt significant.

The next opportunity I had, I decided to try a different approach. I often find that bones of the skull play a role in tension in the neck, back, and rest of the body. Her skull felt rigid and I felt this would help. So I went through and systematically decompressed sutures that were compressed, restored motion, and went back to check.

I also decided to restore normal motion to the arm and shoulder. The nerves going to the arm come out of the neck and upper back so arm issues can cause problems there. Finally, I was finished hoping that I had found the solution. The areas around the spot I was trying to get to start moving were improved, but to my dismay the spot I was trying to resolve remained unchanged. At this point the spot had become more focused, but I could tell that was what she was feeling and that had remained unchanged. She didn’t have to tell me anything, I knew.

That was attempt number two. Again, I had failed to make the change I was looking for and I knew it. My time with getting results for her was running out. I was feeling deflated. I was no longer feeling confident that I would be able to find the solution to resolve her pain, but I had not given up. What was maintaining that? What had I missed? 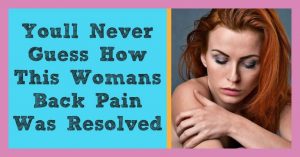 She was in her last week at my office. One day I finally noticed something that I had not before.

Her eyes were tense. I had never seen her wear glasses. So I asked her, “Do you wear glasses?”

“No,” she replied, “but I probably need to get glasses again. I had Lasik eye surgery many years ago and my vision is getting worse again.”

Of course! I suddenly felt like I had stumbled upon the answer. I know the eyes and vision play a role in posture and structure. I told her the next time I treated her, I only wanted to treat her eyes. Later that day, I finally had an opportunity to test out my theory.

She laid down on the table. I checked her back. As I had expected, the “stubborn” ribs had remained unchanged. So I proceeded to gently work on her eyes while she had her eyes closed. I could feel the tension in her eyeballs. Part of that was from poor venous and lymphatic drainage backing up in to the eyes. This made her eyes feel like balloons that were blown up too much. The muscles that change the shape of the lens were also tense. I worked until I felt them relax. Lastly, I worked to relax the muscles that help move the eye and restore motion to some of the ligaments that hold the eye in place.

I spent a total of maybe twenty minutes doing nothing but treating her eyes. I hoped I had found the answer. I went back to recheck the ribs that up to this point had refused to cooperate. Her back suddenly felt completely different.

“There is no pain there!” she exclaimed, “I could feel my neck and back relaxing while you worked on my eyes.”

That was a perfect lesson for me that reinforced the reason I always have to keep searching deeper and deeper for answers. Because doing the right thing, sometimes once, can be far more effective than doing the wrong thing a thousand times.

I kept in touch with her and several months later, her back still felt good. Although it is not something I encounter commonly, I have observed this change with other patients of mine. It is moments like this that keep me in awe of the human body and reminds me we still have a lot more to learn about it.